Here's my old BIO from when I MD'ed Shrek at CMHS:

It’s Erik’s 11th year as music director at CMHS! An alumni of Berklee College of Music in Boston and owner of Pretzyl Music, Erik is a songwriter/producer, composing music for original musical theatre works including: A Song for Christmas, The Velveteen Rabbit, The Kingdom that Couldn’t Sleep, Christmas In Neverland, and Thumbelina. Erik’s Class of ’90 – The Musical made its debut here at CMHS in 2010. His show Princesses was presented at the 2012 ASCAP/Dreamworks Musical Theatre Workshop hosted by Stephen Schwartz (Wicked, Pocahontas) and was later produced here at CMHS last year under the title, Crowned! In December 2014, Erik made his Off-Broadway debut with his new mini-musical, Pellets, Cherries, and Lies: The Pac Man Story at The 47th Street Theatre in Manhattan, NYC. This summer, Erik’s multi-nominated and award winning Alien Vs. Musical (Best World Premiere & Outstanding Songwriting) returns to Los Angeles as part of the 2016 Hollywood Fringe Festival. Huge thanks to my brother-from-another-mother Stephen Reifenstein, Kristina Reifenstein, Sandy Gilboe, Kathy Paladino, and the tremendous cast and crew of Shrek! (www.pretzylmusic.com) (@pretzylmusic)

And one more because I need to 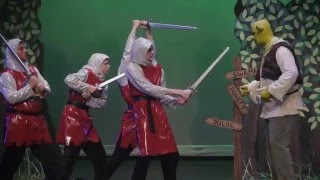